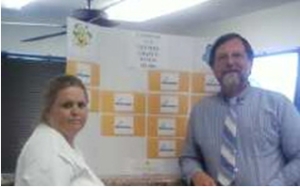 During the months of January through April, 2009, National Tax Centers was celebrating their 25th Anniversary. National Tax Centers was hosting a drawing for a chance to win a “Trip to Anywhere” (value up to $2,500.00) for every client who filed their tax return in any of their 7 National Tax Centers locations throughout Mississippi and one location in Kenner, LA. The winner of the trip was also given a chance to win $25,000.00. The drawing for the trip was held on April 29th, 2009, and the winner of the trip was Paul and Simona Rodgers from Louisiana. The Rodgers was also given an additional opportunity to win $25,000.00 through a chance based game which was held in the Laurel Office on June 29th, 2009.